Despite its size, Scotland’s Celtic heritage is rich and varied from their clans, tartans and native kilts, to their Scotch Whiskey and the infamous haggis. Not to mention the abundance of premier golf courses. Soak up the natural beauty of this historic land in the far north of the British Isles, and marvel at their spectacular Highlands. Let your trip be crowned by the welcoming hospitality of the Scots.

Loch Ness is one of the most famous lakes in the world. Loch is the Scottish word for lake, or fjord. Twenty-four miles long by one mile wide, Loch Ness is a vast expanse of freshwater. At its deepest point, it drops to nearly 1,000 feet.

It is of course the legend of its resident monster that makes Loch Ness so famous. Folklore surrounding a mysterious aquatic beast, date as far back as the 6th century AD, but it was not until 1933 that the legend of the Loch Ness Monster received worldwide attention. It has been proposed that the creature represents a line of long-surviving dinosaurs. Although the scientific community puts most sightings down to hoaxes, in recent years there have been many more sightings of the monster lurking in the deep waters of Loch Ness. Indeed, we have had some clients returning from their week in Scotland and claiming to have seen “Nessie”!

One of the highlights of a trip to Scotland’s capital is Edinburgh Castle. Dramatically situated on the top of an ancient, and extinct, volcanic rock, Edinburgh Castle is a powerful national symbol of Scotland. Part of a World UNESCO heritage site, Edinburgh Castle brings together the harmonious juxtaposition of the Medieval Old Town and the Neoclassical New Town in Edinburgh. It is quite simply unmissable, inviting the visitor to explore not just the castle, but also the bustling Royal Mile.

If you visit Edinburgh in August, why not attend a performance of the legendary Edinburgh Military Tattoo at the castle? 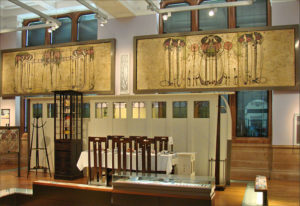 Kelvingrove Art Gallery and Museum in Glasgow houses one of the greatest collections of art in Europe. It is the most popular “no admission” visitor attraction in Scotland and the most visited museum in the United Kingdom outside of London.

First opening in 1901, the museum’s collection is wide-ranging with over 22 themed galleries displaying 8000 objects from Old Dutch Masters to French Impressionists. A must-see is the work of Charles Rennie Mackintosh and the Glasgow Style, a gallery dedicated to one of Glasgow’s most famous sons and his Art Nouveau style movement. 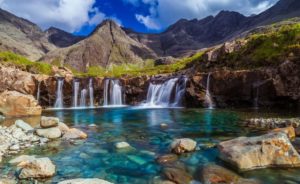 The Isle of Skye is the largest and best known of the Inner Hebrides as well as being one of the most popular tourist destinations in Scotland. Once voted the fourth best island in the world by National Geographic magazine, the Isle of Skye is renowned for its natural beauty. The island is rich in offerings for the visitor from its wildlife, history, geology and stunning scenery, to hillwalking and a wide variety of other outdoor activities.

Immerse yourself in ‘Outlander’ country in the Scottish Highlands. A magical region of breathless natural beauty, and captivating flora and fauna, the Scottish Highlands’ haunting air of mystery will bewitch you. Learn about the Highlands’ turbulent past that has left behind some of the most beautiful and romantic castles in the world. Explore Dunvegan Castle on the Isle of Skye and 16th century Brodie Castle in Moray or visit the castle and gardens of Mey in the North Highlands, lovingly restored by the Queen Mother. Encounter the fighting spirit of the Scots at Glenfinnan Monument, a tribute to the history of the Jacobite uprisings, and learn about the infamous massacre at the Glencoe Visitor Centre. Maybe you have Scottish roots, in which case you can research your ancient kinship at the Highland Archive Centre.

Visit The Palace of Holyroodhouse, Her Majesty The Queen’s official residence in Scotland. Standing at the end of Edinburgh’s historic Royal Mile, this fine palace is the home of Scottish royal history. At the Palace of Holyroodhouse visitors can explore 14 magnificent historic and State Apartments, the romantic ruins of the 12th-century Holyrood Abbey and remarkable royal gardens. Best known as the home of Mary, Queen of Scots, the Palace was the setting for many dramatic episodes in her short reign. Today, the State Apartments are used regularly by The Queen for State ceremonies and official entertaining. 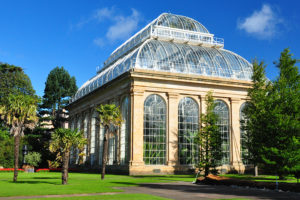 Just one mile from the city centre, the Royal Botanic Garden in Edinburgh is one of the finest botanic gardens in the world, offering you peace and tranquillity amongst 72 acres of stunning scenery. A pleasure for all the family, the Garden offers fantastic views of the capital’s skyline, featuring Edinburgh Castle. You can discover its fascinating history, dating back 300 years, learn about its plantings and walk around its vast and lush landscape. A visit to the Glasshouses is a particular highlight. Begin at the Victorian Temperate Palm House dating back to 1858 and one of the tallest traditional palm houses ever built.  These ten magnificent Glasshouses each has a different climatic zone, from steamy tropics to arid desert, and are home to 3,000 exotic plants from around the world including a 200-year-old palm tree.

Knights, nobles and foreign ambassadors once flocked to Stirling Castle to revel in its grandeur with its superb sculptures and beautiful gardens. Stirling Castle is one of Scotland’s most historically important sites and was once a favored residence of the Stuart Kings and Queens. Today you can encounter costumed characters in the roles of bodyguards, court officials, maids of honor and servants who will welcome you into 16th century life. In the palace vaults, children can try out fun activities such as dressing up in period costumes and playing medieval instruments. Highly recommended is a guided tour bringing to life the castle’s infamous past.

Balmoral Castle has been the Scottish home of the Royal Family since Prince Albert purchased it for Queen Victoria in 1852. The Castle was completed in 1856 when the old building was demolished. A stone on the front lawn commemorates this original castle, marking the position of its front door. 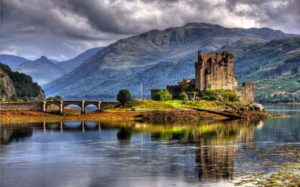 As a Scottish icon, Eilean Donan Castle is one of the most popular visitor attractions in the Highlands. Its setting is truly stunning. Strategically located on its own little island, overlooking the Isle of Skye, at the point where three great sea-lochs meet, Eilean Donan Castle is surrounded by the majestic splendor of the forested mountains of Kintail. Its name derives from the Gaelic, meaning “Island of Donan”, most probably named after the Irish saint, Bishop of Donan, who came to Scotland in 580 AD. A visit to Eilean Donan Castle does not disappoint those searching for the most romantic castle in Scotland!